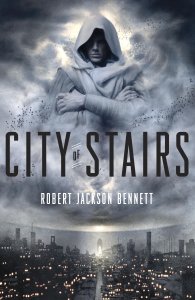 It took me a long time to get into Robert Jackson Bennett’s City of Stairs. I picked it up from Net Galley as an e-ARC and then put it down again in favor of… well, honestly I can’t even remember what. But then shortly after World Con last month, one of the newer industry names I had started following on Twitter mentioned it to an author I was already following. I replied to the conversation, saying that I had found it hard to get into, but that these they were talking about it made me rethink that initial assessment. I thought I was basically shouting into the void, but one of those people replied, told me to keep going. And on that recommendation, I did.

Even once I was hooked—and it didn’t actually take long once I’d picked it up again—I found it difficult to read too much of it at one time. I don’t have much in the way of long, uninterrupted chunks of time that I can dedicate to reading these days, but even the time I generally dedicate to reading before bed was too much time for me to spend reading City of Stairs. A lot of information is thrown at the reader, and generally I don’t find this difficult to contend with, except that this book is filled with covert operations and political intrigue, and fantasy history.

Years ago, the city of Bulikov wielded the powers of the Gods to conquer the world. But after its divine protectors were mysteriously killed, the conqueror has become the conquered; the city’s proud history has been erased and censored, progress has left it behind, and it is just another colonial outpost of the world’s new geopolitical power. Into this musty, backward city steps Shara Divani. Officially, the quiet mousy woman is just another lowly diplomat sent by Bulikov’s oppressors. Unofficially, Shara is one of her country’s most accomplished spymasters—dispatched to investigate the brutal murder of a seemingly harmless historian. As Shara pursues the mystery through the ever-shifting physical and political geography of the city, she begins to suspect that the beings who once protected Bulikov may not be as dead as they seem-and that her own abilities might be touched by the divine as well.

As you might imagine, the blurb hooked me instantly.

Don’t get me wrong; I liked this book quite a lot. But I often found myself looking at the percentage tracker in the corner of my Kindle and marveling that it was taking me so long to read. The pace at which I moved through this book seemed glacial to me compared to the pace with which I generally move through other books.

By the time I finished the book, I had two main thoughts about it.

First, I loved the main character; Shara is blisteringly intelligent and inhabiting her head for the length of this book was a pure joy. I hate reading about characters who aren’t at least as smart as I am, and ones who are supposed to be smarter than both the author and the reader can be can be difficult to capture on the page. Robert Jackson Bennett does an excellent job with this particularly difficult job by using what I can only describe as subtle broad strokes: he hints and implies, and lets the reader imagine the rest.

Second, I wanted the “dead gods” of the book’s blurb to somehow end up being the good guys. Yes, there is an element of that (without getting too spoiler-y), but I was disappointed in how it was executed. I wanted the trickster god to somehow help the main character, to be somewhat more tricksy that he seemed to me, to be sympathetic and human in a way that none of the rest of the gods were. Maybe I’ve fallen a little too in love with Loki these days, but that’s what I wanted. Actually, I got almost everything I wanted, but not with the right god.

I’m not sure if Bennett is planning a sequel, or even that this book sets up a sequel I’m necessarily interested in reading, but City of Stairs is well-written and highly entertaining. And those are my predominant requirements for a “Good Book.”

City of Stairs is written by Robert Jackson Bennett and was published on Sept. 9, 2014 by Crown Publishing.

1 Response to Review: City of Stairs by Robert Jackson Bennett

so many books, so little time

Adventures of a Bibliophile

Amal El-Mohtar
'Randa reads in a passionate and disorganized fa-

In the Book Fort

One page at a time.