Review: Kingfisher by Patricia A. McKillip 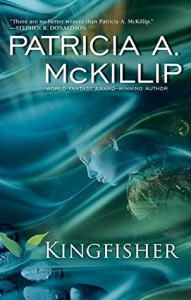 Patricia A. McKillip is one of my favorite authors. Without fail, at the end of every one of her books, I find myself thinking, “That was amazing. That was so beautiful. I honestly have no idea what I just read. Everyone should read this book.” Kingfisher absolutely lived up to that expectation. I loved it, I’m still not entirely sure what happened, and I think everyone should read this book. There’s not a single one of her books that I haven’t liked, if not loved, and holy cow did this book rocket to the top, claiming for itself a place among my favorites. January of 2016 isn’t even over yet, and I imagine that this book will appear on my “Best Books I Read in 2016” post at the end of the year.

Hidden away from the world by his mother, the powerful sorceress Heloise Oliver, Pierce has grown up working in her restaurant in Desolation Point. One day, unexpectedly, strangers pass through town on the way to the legendary capital city. “Look for us,” they tell Pierce, “if you come to Severluna. You might find a place for yourself in King Arden’s court.”

Lured by a future far away from the bleak northern coast, Pierce makes his choice. Heloise, bereft and furious, tells her son the truth: about his father, a knight in King Arden’s court; about an older brother he never knew existed; about his father’s destructive love for King Arden’s queen, and Heloise’s decision to raise her younger son alone.

As Pierce journeys to Severluna, his path twists and turns through other lives and mysteries: an inn where ancient rites are celebrated, though no one will speak of them; a legendary local chef whose delicacies leave diners slowly withering from hunger; his mysterious wife, who steals Pierce’s heart; a young woman whose need to escape is even greater than Pierce’s; and finally, in Severluna, King Arden’s youngest son, who is urged by strange and lovely forces to sacrifice his father’s kingdom.

Things are changing in that kingdom. Oldmagic is on the rise. The immensely powerful artifact of an ancient god has come to light, and the king is gathering his knights to quest for this profound mystery, which may restore the kingdom to its former glory—or destroy it…

Of all the authors who I count among my favorites, McKillip is also one whose writing style I hope to emulate in my own writing someday. Not just because she’s a great writer, but because her stories have a way of evoking particular moods in the reader—of making the reader see, hear, and feel not only like they’re in the world, but like the world is all around them. Part of this, I think, is suspension of disbelief. And not just in the reader. Since I was reading this book for review, I tried to pay more attention to particular techniques that McKillip uses to engaged her readers this way. One thing I noticed is a lack of confusion in the characters. Strange things happen to Pierce that by all rights should make him stop and say, “Wait, what?” But because he accepts it and moves forward, the reader does the same. Strange things become normal, even when the normal is already strange and fantastic.

This book was different from many of my favorite of McKillip’s book in another way. Rather than creating a world from scratch, the world of Kingfisher resembles ours in many ways. Equal parts modern and fantastic, the sorceresses and shapeshifters of Severluna don’t feel out of place with the cell phones and cars they use. This blending of elements creates a world that the reader can really feel at home in, melding the fantastic elements of kings and knights and sacred quests with the comfortable familiarity of a modern pub and inn and all the recognizable people that comes with.

Moreso than her previous books, I felt that this one left me with so many unanswered questions. That’s usually something I expect with McKillip’s writing, but at the end of Kingfisher I felt there were characters whose stories were incomplete in ways that seemed usual. The way the story ended almost made me feel as though my copy of the novel was cut short, or was—I hoped—an earlier edit, while the published version would contain more of an ending. While the story wraps up Pierce’s story neatly, nearly every other character’s story is left open and left me wondering what happens to them next. The strange double love triangle of King Arden, Queen Genevra, Sir Leith, and Heloise is left completely unresolved, and of the four POV characters, it’s only Pierce who gets a neat story. The future of Prince Daimon, Princess Perdita, and the cook Carrie are left mostly untouched and unresolved.

As always with books I love, I wanted more in this world, more of these characters. But since the bulk of McKillip’s books are standalone novels, I suspect this will be the same. Part of that means I don’t know what her next book will be, or even when it might come out. But while I’m eagerly awaiting whatever Patricia McKillip writes next, I can use the time until then to re-read the rest of her books.

Kingfisher is written by Patricia A. McKillip and will be published on February 2, 2016 by Ace.

2 Responses to Review: Kingfisher by Patricia A. McKillip

so many books, so little time

Adventures of a Bibliophile
Writing the Ridiculous

Amal El-Mohtar
'Randa reads in a passionate and disorganized fa-

In the Book Fort

One page at a time.